My Herman Miller Aeron arrived in a huge box. Upon opening the box, I was happily surprised to see that it came pre-assembled. I just needed to pull it out of the box. Nice. After taking a few commemorative photos of the chair and dragging it to my room, I watched a quick video on all the adjustment settings of the chair. 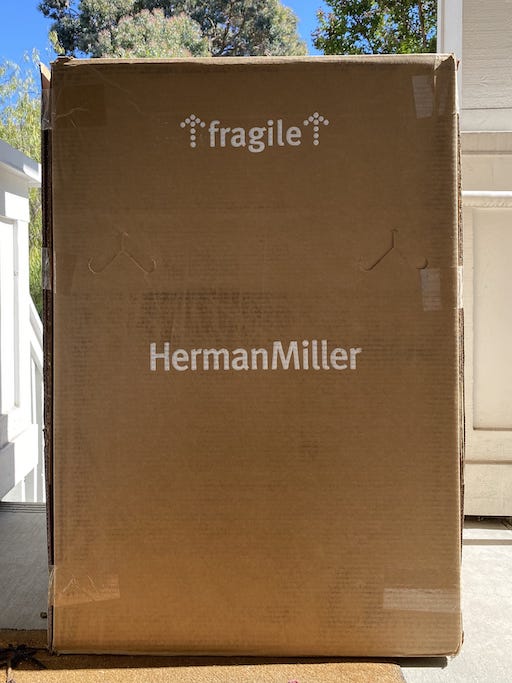 The mesh seat was stiffer than what I remembered, especially compared to the foam seat on my Steelcase Think. In direct contrast, it feels more supportive. It also feels less forgiving when I slouch, which is probably a good thing ergonomically.

After disengaging the tilt limiter, I was surprised that the backward tilt angle was pretty limited. The forward tilt option also felt a bit stiff and forced, but maybe I haven’t reduced the tilt tension enough. 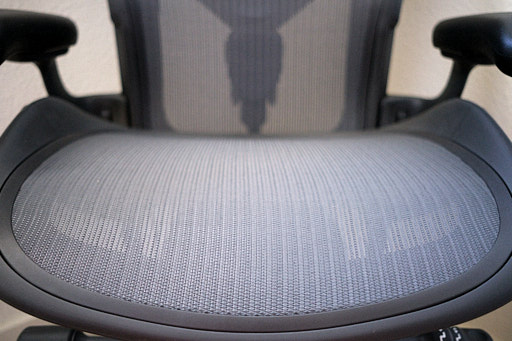 Edit from Day 2: It turns out there are 3 levels of tilt limiting. I thought there were only two. After I disengaged the last tilt-limiting level, I was able to comfortably recline to a point that I had initially expected.

I’ve reduced the reclining tension, so it’s easier to recline. This also made the forward tilt more forgiving, which allowed me to rock back and forth a bit as I worked.

This chair is persistent in making me sit ergonomically. It’s difficult and uncomfortable to slouch, so my back is almost always against the back of the seat. I’m really glad I got the lumbar support upgrade.

I’ve been fiddling with the PostureFit lumbar support tension knob, going from being uncomfortably stiff to barely noticeable. I landed somewhere in the middle where I am consistently aware that it’s against my lower back, but it’s not longer digging into it. That soft caress against my lower back, or the lack thereof, has become the clearest indicator of proper posture.

As for the arms, I’ve opted to avoid using them while I’m typing or using my mouse. I have to say, they’re easily the comfiest armrests that my pointy elbows have had the pleasure of resting on, and also quite adjustable! They’re still not as easily adjustable as the Steelcase Gesture’s because you need to unlock them from the back of the chair to change the height and they don’t have the same insane range of motion. The arms have a good amount of resistance when adjusted horizontally, which makes it difficult to disturb my fine-tuned settings.

On the negative side, I’m noticing that I can’t sit on the seat for more than an hour and a half before my bottom starts to feel a bit tense. Hopefully, I’m just getting adjusted the mesh seat and the enforced ergonomics!

It’s actually day 4, since I didn’t have much to write about yesterday and I didn’t make any adjustments.

Today’s biggest update is that I’m getting accustomed to the stiffness of the mesh seat. Not only am I getting used to it, I’m starting to love it. My back feels straighter, my shoulders seem less hunched, and I feel just that little bit taller whenever I stand up. Maybe it’s just placebo.

This noticeable change might be related to an NPR article I read a few months ago about modern chairs becoming too soft, which inadvertently promotes slouching and poor posture. Thankfully, that lack of foam and the additional stiffness seem to be working wonders on my posture.

I’ve also started to use the armrests, mainly to support my mouse-wielding hand. They come in handy when I lean back, recline like a boss, and stare at the ceiling for no reason. When I’m typing, they linger to the side without disrupting my elbows.

So far, I think I’ve dialed in the perfect height and reclining resistance. I’ve left the tilt limiter off, since the reclining resistance seems to be enough to keep me upright while still allowing me to recline whenever I want to. As for tilting forward, I’ve resolved to reserve it for those times where I’m diving deep into a tough problem and I need to get up close and personal with my monitor. That typically amounts to at most 1-2 hour-long sessions per day.

That initial tenseness that I felt after an hour on the chair? Gone.

I’ve been able to sit on the chairs for at least 2 hours without feeling uncomfortable. Maybe my body’s adapted to the chair or the mesh has finally succumbed to the delicate shape of my lower half.

After the first few days of getting used to the Aeron, it’s become my favorite office chair. I rarely fiddle with the adjustments and have found that I can comfortably sit on it for hours without breaking a sweat. My posture’s improved quite a bit, too!

Would I recommend it?

If you sit on your chair for hours everyday, want a chair that promotes good posture, and have a large enough office chair budget, then I highly recommend the Aeron. If you want a slightly more relaxed and conforming chair, you would probably be better off with the Steelcase Gesture which I mentioned in my last blog post. Although if you want a lower-priced Herman Miller, then the Sayl is more likely up your alley.